After the last page comes the first: this introductory statement, which could well be the conclusion, is instead, the beginning. Last June, Riccardo Mannelli and I were sitting at a café, near his studio in Rome. It was a beautiful sunny day. We were having something to drink and watching people pass by. The flow of humanity. Someone we both know asked us how we had met. It was a girl. To my surprise, Riccardo replied: “We met in a brothel”. Obviously he didn’t intend the literal, objective meaning of those words. Brothels no longer exist, and it’s clear our meeting took place in other circumstances. My thoughts had to go beyond his words and their literal meaning, beyond verbal language. Why did Riccardo give that image of our meeting? I started thinking. Actually, I started thinking differently. I had to understand Mannelli. I had to look into the images and not the words.

After the last page comes the first: this introductory statement, which could well be the conclusion, is instead, the beginning. Last June, Riccardo Mannelli and I were sitting at a café, near his studio in Rome. It was a beautiful sunny day. We were having something to drink and watching people pass by. The flow of humanity. Someone we both know asked us how we had met. It was a girl. To my surprise, Riccardo replied: “We met in a brothel”. Obviously he didn’t intend the literal, objective meaning of those words. Brothels no longer exist, and it’s clear our meeting took place in other circumstances. My thoughts had to go beyond his words and their literal meaning, beyond verbal language. Why did Riccardo give that image of our meeting? I started thinking. Actually, I started thinking differently. I had to understand Mannelli. I had to look into the images and not the words. Brothels were places of pleasure, not accepted morally by society. Behind the secrecy of their walls however, the most unimaginable people could meet: politicians, married men, fathers, offspring, mothers and sisters of acquaintances, aristocracy, clergy, much more humanity than one could imagine. A place where they all discovered they were far less different than what they wanted people to believe. To those who entered, life in a brothel was meant to be taken for true life, something real. The stale air was real, the odor of linens, laundry and sex – just like the smells of blood and meat in a butcher shop. By saying we met in a brothel, Mannelli meant our encounter was real, not formal, that it was pleasurable and not based on a false relationship. By saying this, was he saying I understood his artistic path, his works, his way of proceeding and being? By accepting his “human brothel” I was accepting his artistic path. Here is what I can add about Riccardo Mannelli, because much has already been said about him and his art – and much is yet to be said, Mannelli is consistently and concretely real. He winks an eye at no one, seeks no easy gratification, he is not a parlor room painter. His work is one of generosity which means being exacting. From the Latin exactus, to be accurate.  Watching him draw, paint or handle a model, is a thaumaturgic experience. It is thaumaturgic for the culture of opposites which embrace and always determine “a moment of truth”, like when we look at a lifeless body, we understand both the elusiveness and its opposite, the concreteness of the corpse. It is thaumaturgic because Mannelli spares no one, his imprint narrates and speaks, he is in the history of contemporaneity because he refuses the contemporaneity of history. He says something true, and this truth can distress us, as Vittorio Sgarbi suggests. As it is in the brothel, like being before a mirror when we know no one is looking, we admire this truth and know, at heart, that it pertains to us. It is impossible to define Mannelli, he has vast talent, his artistic, humane and intellectual work is complex. I will limit myself to listing part of the reasons which compelled me to produce and curate this exhibition. Reasons which were characterized by particular conditions and circumstances that occurred during this period of work with Mannelli.

I’ve long envisioned this country as an archipelago. Its islands as floating islands.

Riccardo Mannelli is one of these floating islands.

Gianluca Draghetti | RICCARDO MANNELLI: Notes for the Reconstruction of Beauty

WHO IS RICCARDO MANNELLI

Born in Pistoia, he has lived and worked in Rome since 1977. One of the most incisive and sharp Italian pencils, Mannelli since 1975 has been working with the most leading Italian satirical magazines with comic magazines as Linus and Alter Linus, and with newspapers and magazines such as Playmen, Blue (Coniglio Editore), L’Europeo, La Stampa, Il Messaggero, Lotta Continua, Il Manifesto, La Repubblica, Il Fatto Quotidiano and abroad L’Heco des Savanes (France), Humor, pagina 12 (Argentina), Il caffe (Locarno). [source: Wikipedia – read the full bio] 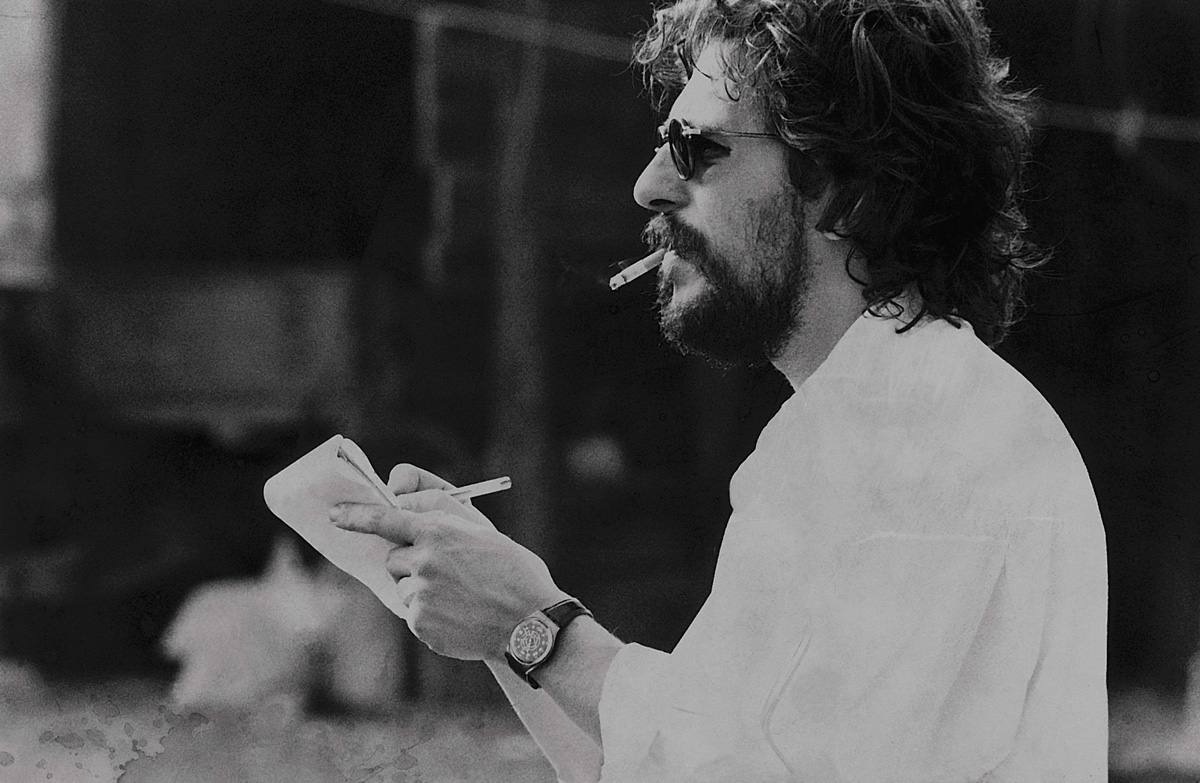 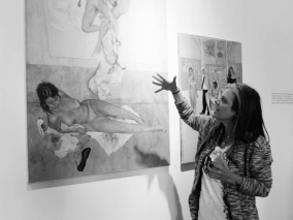 Riccardo Mannelli is not unknown in the US

Riccardo Mannelli is not unknown in the US — but when his compelling work is recognized, it is most often by fellow painters who admire his particular combination of advanced techniques in color and draftsmanship and the innovative, refined deliberations of composition he lavishes on his edgy content. Yet it may prove to be the subversive sensuality of his ultra-modern figures and portraits, demonstrating a kind of feminism that is really a powerful revolutionary humanism, together with the rich tenor of his unbowed social and political commentary that will finally capture the imagination of a whole new generation of audiences.

Classical but not antique, the gestural empathy of Mannelli’s decisive draftsmanship provides an art historical foundation for his content’s flights of wild fancy. In the tradition of transgressive masters like George Grosz, Otto Dix, and Egon Schiele, Mannelli’s decadent theatricality explores the specific, volatile mystery of the human condition at the edges of modernity. The sublime balance of beauty and terror, fear and obsession, past and present, sex and politics, humor and critique, line and color, surface and narrative speak to his appetite for emotional truth and extreme honesty in all things.

Often, his figures remain ethereal while the objects that surround them are fully rendered, distinguishing between the material solidity of the external world and the wavering paradoxes of consciousness. “Art is not something to understand,” he says, “it is something to eat.” He means that painting’s poetic sensuality is concrete, its sublimity something physical to experience with the soul, not to process with the mind. Mannelli is happy to implicate himself in the unflinching strangeness of the modern vision, as both a product and devotee of a world that requires stern renovation yet inspires generous acceptance. He is dedicated to beauty in all its forms except the conventional, both seeking and creating a graceful ecstasy amid the ruins of the personal and political corruption that threatens to dissolve society yet miraculously never quite does. 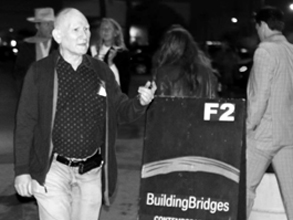 RICCARDO MANNELLI: THE PEN IS MIGHTIER THAN THE ABSURD

The first thing one notices about Riccardo Mannelli’s paintings and drawings, of course, is that they principally – nearly exclusively – depict humans, and that they do so with an exactitude that confounds more than just the eye. Mannelli’s is not a cameratic verism; it is an ocular verism, a super-realism that borders on the supernatural . Still, it is an achievement less optical than manual, vesting in the hand the ability to render and even recall the look of a person’s face or body, pose or gesture.
Mannelli sets these very real people – people who actually exist in and around his circle in Rome – in very ambiguous spaces. Indeed, they occupy no real space whatsoever, except perhaps that of an implied stage. In this, they admit to Mannelli’s reliance on the default circumstances of the studio. But they also establish a condition of spectacle in their often-elaborate theatrics. These are sexually charged, which contextualizes the nakedness of most of the figures (and the adornments and clothing of the rest). Indeed, what Mannelli would have his friends enact are elaborate rituals of courtship, domination, cruelty, tenderness, and post-coital lassitude, as brutal as a Max Beckmann tableau and as artificial and self-reflective as a John Singer Sargent portrait.
From the start, Mannelli’s bravura technique struggles almost sportively with his subject matter. If you pay attention to the prurience, the breathtaking virtuosity of the figural renditions stridently calls attention to itself, and if you study Mannelli’s manner, the ornate depravity it pictures pulls you into its depths. The artist is not trying to implicate you so much as to train you to witness: whatever attracts you has yet another facet to it.
This explains in part why Riccardo Mannelli is considered one of Italy’s most incisive political cartoonists. His caricatures the victims of his pen with a ferocious hyper-accuracy; even symbolic ciphers take on a grisly immediacy that renders them poignant, repulsive, and all-too-human. In his paintings and drawings Mannelli is somewhat kinder. But in these works of the studio, too, the subjects’ minds are as benumbed and their hearts as enflamed as their flesh is willing. We must witness. 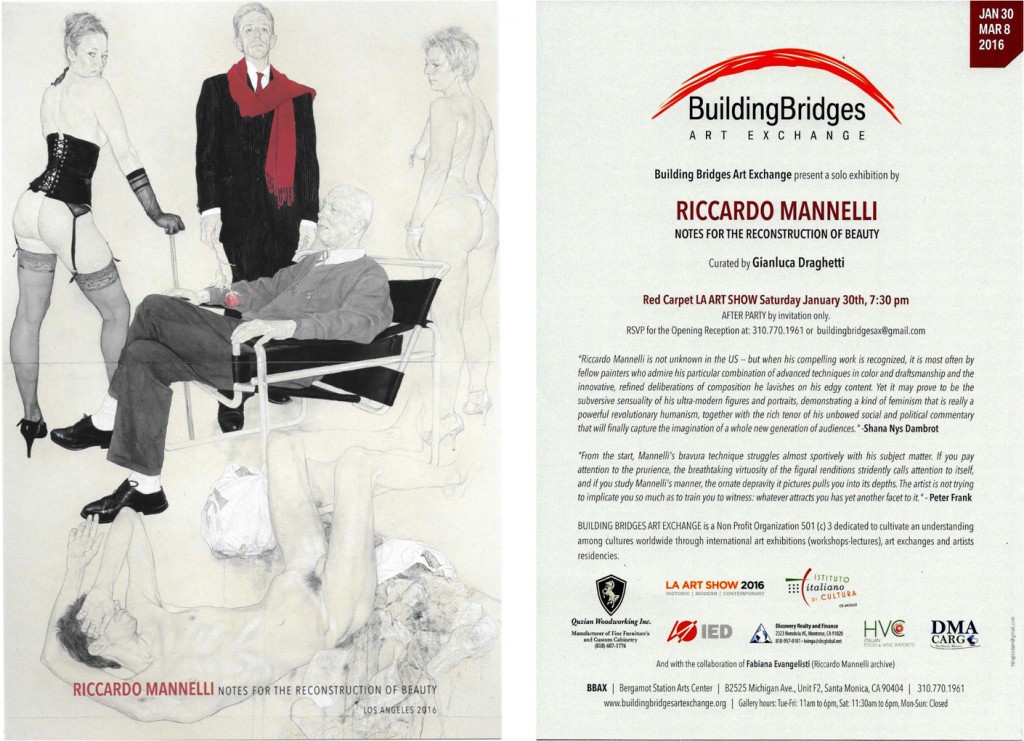 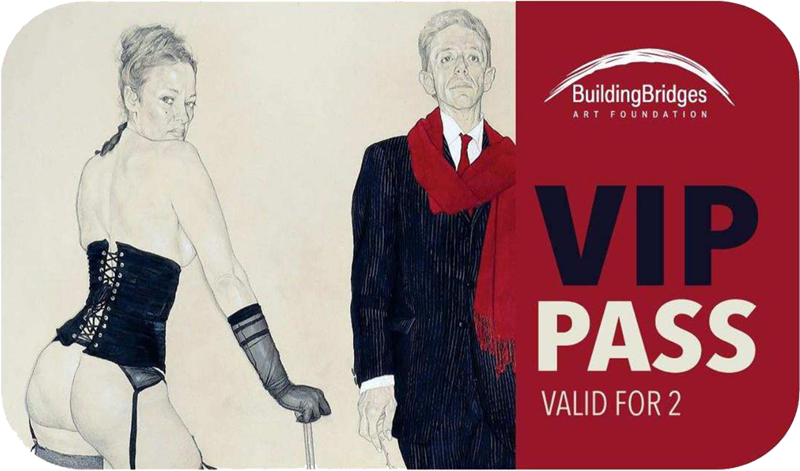 Notes for the reconstruction of Beauty

FacebookTwitterLinkedInRedditPinterestEmail
We use cookies to ensure that we give you the best experience on our website and only to analyze traffic (IP Anonymized). This includes cookies from third-party websites if you visit a page which contains embedded content from such content sharing websites. Such third-party cookies may track your use of this website. If you continue to use this site we will assume that you are happy with it.I acceptPrivacy Policy